Friday
I had been invited up to a friends for Chinese New Year in Manchester. I had booked the Friday off as A/L anyway so took advnatage of a lazy day and picked a friend up from work@4. What should have been a relative easy journey, turned into a two hour marathon just to get around Oxford. We should have been there by 7 at the latest we crawled in at 9. We still managed to get to Sam's chop house www.samschophouse.co.uk is a great place to eat and we had a really nice meal even though I was really tired from the travelling. Even the waitress staff(Dina) was really good and we ended chatting to her for a while until her boss told her off for nattering and not serving.

Saturday
After being generally lazy and catcing the rugby in the pub. We spent the afternoon preparing the meal, in fact I stayed out of the way as my contribution and acted as dogsbody. The food was divine 8 various dishes including lamb, beef , chciken, fish etc It was a great evening with freinds of freinds I had heard about and never met and 0thers was a bit if a catch up. I am a light weight so I slunk off to bed just after midnight, it seems the witching hour is my down fall.

Sunday
Two blog entries in two days, it does make a difference having a computer handy. Anyway prob going off to the Chinese Quarter to watch the parade TTFN 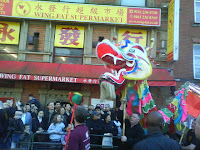 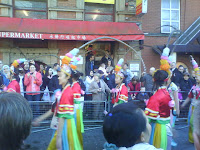 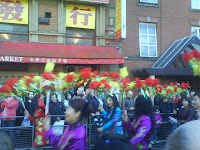