This morning started early with a cup of coffee at 0645. The T's wanted to get off early, normally it is Em that holds up proceedings but this time it was me, sorry. I drove Paul with Sue not far behind up to Pillings Lock Marina situated on Flesh Hovel Lane, what a great name. At this point I wold have shown you a pic of the marina and the boat, but my internet connection is so slow, its been trying to load the pic for the last 6 mins... 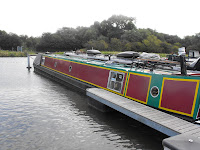 After dropping the car of at Red Hill marina the site of the IWA festival, for the T's to return tonight, I grabbed a bacon butty from the cafe and we where off...
The River Soar is like the upper reaches of the River Thames, twisty and turning through the bottom of the valley. We also had the last blows of hurriance Bill which had come across the Atlantic, which made steering interesting at times.. We did pass a lovely site of a church at Normanton on Soar it even a a little mooring for those wishing to stop and take part in service.
We travelled with a hire boat and shared the locks until we hit Kegworth Deep Lock. We had to stop as the engine temp had suddenly went sky high. We where throwing out black smoke and the engine was struggling for power. After topping her up with water and waiting a while( we managed lunch) we decided to press on abate a little slower than normal. We finally saw the tell tell sign of the power station and we decided we were nearly there.
This is when the mizzle had decided to turn to a more persistant drizzle. We had to turn below the IWA site and face upstream( as all good boaters should do on any river)for our mooring. Mrs T was on the tiller and we went for it at Redhill Marina, things where going great until the wind decided to pick up again and push us sideways. Mr T used the bow thruster a 15ft pole to push the front round, apart from a little scrapping of the bottom we where able to get round and time up on our alloted space. This was next to old friends/harbourmaster and generally nice people Mike and Jen. Soon after our other neighbours arrived Dave and Jane, too many J's for me..
Well the T's have departed for the much awaited arrival on the results on the doormat and I am left for a quiet night on No1, my home on and off the next 8 weeks, ah bliss, till the next installment ttfn
Posted by Whitewater at 6:56 pm