The water have been falling over the last few days and I managed to escape this weekend. I went with friends to the Brookalnds museum in Surrey. There is a large collection of old car there that where used in the hay day of the Brooklands track It was the first purpose built race track, it was built at the turn of the century with a large collection of cars which set world records and raced in the early grand prix days. It also houses one of the original Concord's and a Wellington bomber which they found at Loch Ness(perhaps this was Nessie after all

In contrast next door was the modern, Mercedes-benz world.It holds a vast collection of the new cars as well as vast collection of old photographs from the 1910's when racing was at it height. It also had some classic cars there as well 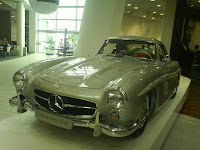 To make the day complete we found a cracking pub in Benson, called the Three Horseshoe's the beer was fab the food was great and it was a lovely atomsphere in there. 4 stars, never could be 5 now unless they have an alt smoking area which is friendly and inviting. Back to Europe for that as they ignore everything.

Posted by Whitewater at 6:35 pm

fabulous! I really enjoyed my trip there - did you drool over all the motorbikes too?

I drooled over it all, then they asked me to leave. In Mercedes Benz world I thought I was going to be arrested, not quite sure what they would have put on the charge sheet. Prob put on the car offenders list and told to keep 1/2 mile away from all car show rooms.