How this for a week. I watched the Thames rise over 6 feet till it was lapping around my ankles then my knees now its up to my thighs. A great investment was a pair of waders, I have had to use them since Sunday to get and from my boat. It's such a bizarre site seeing the marina rise and rise and the waters just coming in and surrounding in great pools of water. The car park had nearly 3 ft of water. the fields around are just vast lakes. I went to Culham on Tues and the water there is coming over the bullnose like a fancy water feature, you have to see it to believe it. 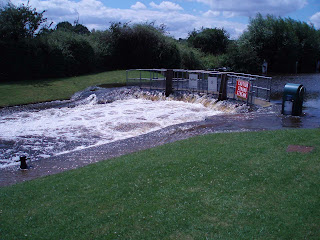 Another sight to be hold was all the fire crews and ambulances helping people off their boats that where stranded. To top it off their was about three TV crews filming there. I managed to watch three different news programmes all being filmed on Abingdon bridge.

I had to do a loo run. I got three loos in the back of the car. This had to be moved by row boat across the car park. Then i drove to Goring lock and emptied there. I carried them back across by using a rope andattaching them together and letting them float across behind.
Posted by Whitewater at 6:32 pm

fantastic! I would have loved to see you doing that. I am getting cabin fever in the *house* so it is good to hear how things are going on the water!

I'm not a boater :-( just a frustrated wannabee boater (one day!). Meanwhile I enjoy reading boaters blogs as a way of discovering the joys and perils of canal life. I'm especially interested in blogs by folk my own age (35), more so than blog from retired folk who do not have the same demands on their lives. Does Blogger not allow feeds - I use an offline rss/atom feed reader to catch up on blogs during dull moments at work (and that's a lot of blog reading time!). It would be good to add your blog to the list.

Don't get stuck in the floods!
Regards, Nic

and there was me thinking you had turned over a new leaf!