A great day out.

I had a most unsual day in saturday. I got the chance to go the home of english rugby, Twickenham. I went to a friend of a friends birthday trip. It was great, the stadium is awesome, the atmosphere was excellant, the game however was terrible. It was a real shame for my first ever game there.

The day started with a quick drink, you can't start the day on a dry stomach and a clear head, so a quick G&T to help the day off( there is a drinking theme through the dsay so take it as read that more alcohol was consumed) 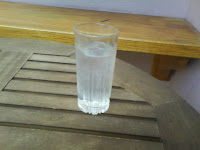 The first one of the day


We got a minibus into Twickenham and hit the pub, it was a great ice breaker as I was with some people I had not met before. It was a small world as two came from my part of the world. Jo one of the girls even try to matchmake me with one of her friends.
When we got the stadium it was just such a sight,all the people, the food and beer stands. The game was poor but the whole experience was great. 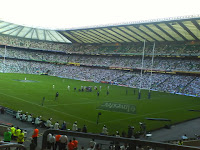 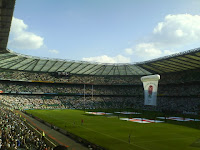 Even in the bar afterwards, French and english where chatting away and the music playing was helped by several hundred people singing along,awesome.
A quick return to the pub for a refreshment and where the minibus was picking us up from.
We finished the day off with a curry. All in all apart from the actual result in the rugby, it was a brillant day.
Posted by Whitewater at 11:14 am