Well I have to admit even by my standards it has been a lazy potter. I left around 9.30 from Alrewas, I managed to hit the locks OK, one or two people around to give me a hand. I then got to the Fradley flight. It is five locks one after the other along with the junction which takes you along the Coventry canal. 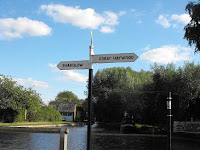 I managed to stop half way up and do the necessaries with the porta potti etc.
As I hit the fourth lock as nothing seem to be coming down, I left the boat in the lock and wondered up to the last one. After setting it up and walking back down their was a very confused hire boater, thinking they where looking at the Marie Celeste. I have know stopped just above the flight. It is lovely here the cut is surrounded by tress and there is no main road or flight path to be heard. 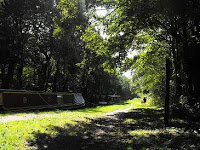 I think I will have a look at the nature reserve and then see if the Swan has the football on. 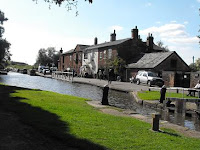 Well I tried to go out for a bike ride, however I forgot a map, so had no idea where I was going. I also forgot the keys for the padlocks to lock the bike up. In the end I went into the Swam for a pint and see if they had the football on, alas no, and I can't seem to get a tv signal.

Well will be pushing on tomorrow, I am still planning to do the Caldon canal by the weekend
Posted by Whitewater at 2:25 pm