We had a muted start to the day. We still had a bit of backward travel. As we reached the junction we got something around the prop. After a bit of delving found it was a lump of wood. We put the engine in forward and it cleared.

This is the first lock on the Stratford upon Avon 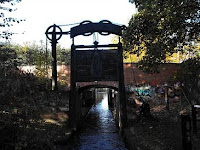 As we approached the first lift bridge there technical problem so BW was working the bridge. 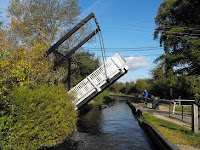 The Stratford is a lovely canal, esp as the Sun was shinning.... 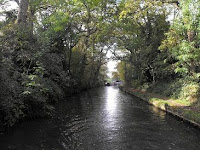 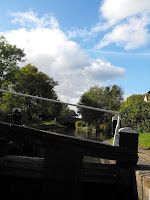 We then hit Lapworth flight, officially the first lock is at Kings Norton. However the rest of the locks are close together. 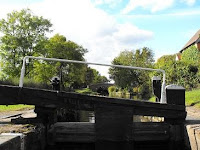 We did 19 locks in just under 3 hrs. We did have a hire boat in front,so I was helping them out and also setting the lock up for the boat behind. 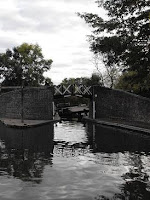 We soon hit the junction and are officially on the Grand Union canal. Mags has joined for the evening and tomorrow, and we are heading down Hatton flight. The T's are making an appearance in the evening, so the gang is back together.
Posted by Whitewater at 11:38 pm

I'd forgotten how delightful the north Stratford is, suburbia is spreading, the Dicken's Heath development, but that is very attractive, I'd live there out of choice.

Elsewhere very rural. However, the block of tree wasn't the only thing we picked up on the prop, someone's boxer shorts ended up around the prop, and I went delving to remove them once we tied up at Kingswood Junction. On my first boat trip many moons ago, the boat manual said "always have a weed free screw". A moto to take through life I find.

Went to the Navigation and enjoyed a couple of beers, and a moderatley early night for the trials of Hatton and onwards. The T's got held up so it's now Sunday night before we meet up.Mike

Anonymous said...
This comment has been removed by a blog administrator.
4:19 pm